Some of my friends, including myself, are addicted to cookbooks. Chantal, one of my colleagues is one of them. This was her recipe entry for healthy recipe month on the blog. This recipe is brought to us by Curtis Stone. He is an Australian celebrity chef, author and television personality.

Curtis’ original recipe called for fennel, which according to Chantal, was a delicious addition. I, unfortunately, forgot the fennel at the store and made the recipe anyways. It still turned out delicious, but please feel free to add the fennel!

I also used dried rosemary as opposed to fresh springs. Either will work. 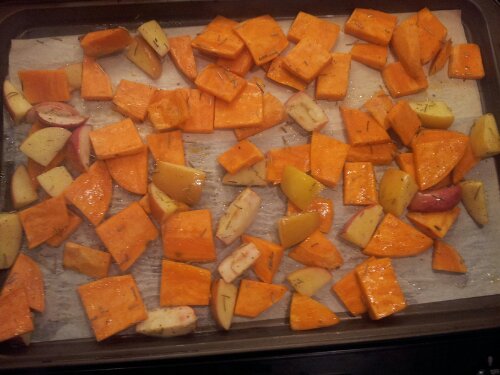 I could have eaten a whole bowl of the side and skipped the pork chop at this point. The sweetness of the potato and apple mixed with the rosemary is a wicked combination.

Make sure to wash your meat and pat dry before cooking it. I like to think of washing the meat as it getting ready to go to a party… a delicious party where it is the guest of honour!

Making the sauce was super easy!

If you like the sharpness of vinegar, this recipe is definitely for you! I used whole grain Dijon mustard, as this was all I had. You can see the mustard seeds, which adds a little crunch. Delightful! 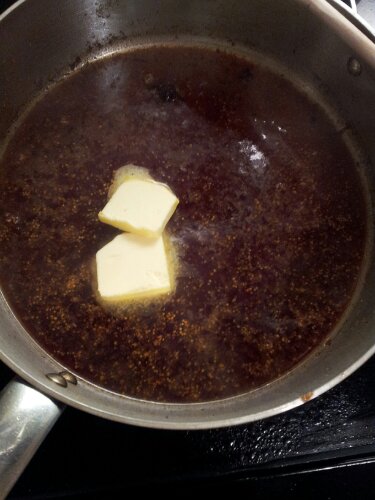 Remove the pork from the refrigerator and let stand at room temperature while the oven preheats. Preheat the oven to 450°F. Place a large rimmed baking sheet in the oven and heat until very hot.

Carefully remove the baking sheet from the oven and spread the sweet potato mixture on it. Roast, turning the ingredients over halfway through, for about 15 minutes, or until the potatoes are nicely browned and tender.

Meanwhile, cook the pork: Season the pork with salt and pepper. Heat a large heavy skillet over medium-high heat. Add the olive oil, then add the chops to the skillet and cook for about 5 minutes per side, or until golden brown and barely pink when pierced in the center with the tip of a small sharp knife. Transfer to a platter (reserving the oil in the skillet) and let stand for 5 minutes.

Pour off all but 1 teaspoon of the oil from the skillet, leaving the brown bits in the pan. Return the pan to medium-low heat.

Add the apple cider, and bring to a simmer, scraping up the brown bits with a wooden spoon. Whisk in the mustard and simmer for about 2 minutes to reduce the liquid slightly.

Remove from the heat and whisk in the butter to lightly thicken the sauce. Season to taste with salt and pepper.

Divide the sweet potato mixture among four dinner plates. Place a pork chop alongside the vegetables on each plate. Drizzle with the pan sauce and serve.

Look for something delicious!

What peaks your interest?

“Once a year, go someplace you’ve never been before.” - Dalai Lama . New country, new city, new place in your hometown. Doesn’t matter. Let the adventurer within you explore. 💕 • #travel #trysomethingnew #explore #adventure #home #away
Getting into the Halloween spirit! . Which one is your favourite?? 🧟‍♀️ • #bbmsugarcookies #sugarcookies #halloween #sweets #cookies #zombie #monstet #pumpkin #ghost #spider #hauntedhouse
Was on a cousins trip this weekend to Nashville, TN where my sister and a cousin went and grabbed donuts from @five_daughters_bakery. I got my hands on one to have a bite. . Needless to say, they didn’t have much when I handed it back 😏 • #fivedaughtersbakery #family #loveyou #donuts #thankful #delicious #oops #nashville